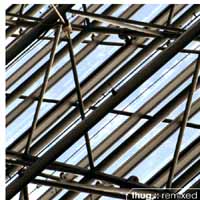 To coincide with the release of the long-awaited Aural IndustriesCD, "Thug:Remixed" (go to their page for info on how to order!), us here @ Monotonik are proud to release a 3-track sampler with a taste of the re-interpretations of Tim Koch/ Thug [Defocus, AI, Surgery] available on the disc itself.

Although the CD contains remixes by a whole bunch of other supercool idm types (Pimmon, Aspen, Superscience, Octopus Inc, Sense, and more!), we picked three of the most intriguing to put out there.

Finally, Finland's Lackluster, not a stranger to Monotonik release-lists himself, contributes a typically pure-of-heart remix of "Quasipede", starting out all coy and shy, before slipping in a marvellous sine-bass and allowing it to skip all around our head for the final part of the song. All in all, a satisfying conclusion.